Hey everyone. I haven’t posted here for a while but I have some stuff I’ve been going through and coming to understand which may be helpful. I realized that a lot of my feelings of shame surrounding SP came from fears of being gay or liking men, however it took conversations with a therapist and some journaling to really understand that I like men and women, and that that is ok. I think a lot of these thoughts of are you straight or gay kind of limit you into select categories which make thoughts of liking more than one gender kind of scary and confusing. You can be attracted to girls but also still have fantasies about men and that’s okay. Or you can just be interested in being submissive to either gender or to just one and dominant to another or whatever, everyone’s sexuality and preferences is on that spectrum. I believe SP is targeted to make the thoughts on the homosexual side of the spectrum feel wrong or like you are a loser or person for thinking that way so you must become a girl since only girls can be with men. It is a fucked up system of P created by some people who I believe are not only homophobic but may even be somewhat sadistic. I think if you want to dress up as a girl and fuck guys, go for it there’s nothing wrong with that. But don’t do it out of shame and out of negative emotions that come from SP. Now you may naturally be wondering if the thoughts you are having are natural or caused by SP, and I think it can be helpful to trace how you arrived to the point you are at now. For me, for example, my development was from vanilla porn/lesbian to gay to BDSM to cross dressing and then to SP. I found that this progression made sense as I found that I enjoyed submission early on in the process of porn use and developed a fetish for cross dressing which I did enjoy and found sexually arousing. I believe that my internalized homophobia as to who I was manifested with this fetish to lead to my shame of my bisexuality and to the usage of SP which hurt my already low self esteem and created a situation where I would not only cause self harm to my esteem but subconsciously repressed my desires under the guise that it was forced. I personally have found that, after having sex with women, dominatrixes, and men, that I find all of these types of sex exciting and stimulating for different reasons. You can feel turned on by many different things and just because they may seem to clash or contradict one another does not make them wrong to be feeling. I have personally come to this conclusion after dating my girlfriend of one year, and it really did feel good to be able to lift this weight off of my shoulders. However, today I felt a new one put upon it when I realized everything I had done before and during our relationship in regards to SP and fulfilling this fetish. I had always had the two separated, my real self and my ‘porn self’. When I would watch P or get into the SP mode, I crossdressed, fuck many different objects, enter into a bimbo sissy mindset, and even use Omegle on several occasions while watching P and performing sissy acts while under the mindset of this being a different me who was doing these things in almost an out of body experience. And just like many of you, once I climaxed, it all came crashing down and the shame kicked in. I guess it is a good thing that I am experiencing this kind of regret, though, as I believe that this is honestly the kind of awakening I need to quite this stuff for good. To be clear, I do mean to quit SP and engaging in this fetish online as I do plan to come clean about these desires and what I have done as I think I need to clear my own conscience and clear the slate from this point of my life. I am going into day four no P and will be meeting with my therapist this Wednesday. I guess this has gone on for a bit longer than I was expecting, however I had a lot to get off my chest and I hope that this has helped some of you out there. I can’t offer the answer to exactly where you fall on the spectrum as that is up to you, but when you stop trying to deny certain parts of yourself and desires as being wrong and truly look into your feelings, the answer honestly does become much easier to find. I first began trying NoFap about 2 years ago. I came back after I developed issues climaxing and began the 90 day hard mode challenge just for that and no real other reason. I believe that my reason this time, going beyond my relationship, sex, and everything is the best one: This is for my own personal happiness and contentment in who I am as a person. I wish you all luck on your journey and if any of you need a person to keep you accountable please do not hesitate to reach out.

Also to clarify I do not mean to imply that if you use SP you must be somewhere on the spectrum I understand for some this may not be the case I only mean to say that it is important to be honest with yourself about the causes of the desire in order to truly come to the core of why you use SP and to find your way through it. 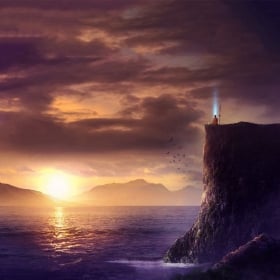